In the 1970s a group of committed volunteers came together to rebuild the warehouses and locks and to make it a home for an unrivalled collection of restored boats. 40 years later the site has become the National Waterways Museum Ellesmere Port.
Plans for a Boat Museum were first discussed in 1970 at a meeting between Peter Froud of Inland Waterway Cruises Limited, Edward Paget-Tomlinson, Keeper of Shipping at Kingston-upon-Hull Maritime Museum, photographer and journalist Harry Arnold, artist and writer Tony Lewery and former Director of Manchester Museum David Owen. They each had an interest in the preservation of the canals and inland waterways and were concerned that significant historic boats which formed such an important part of the commercial scene in the past were rapidly disappearing. They proposed to retain and preserve as many such boats as possible, to obtain support from people with similar interests to commence restoration of these boats at their existing moorings and to find a site where a boat museum could be established, preferably in traditional industrial buildings. Soon an organisation called the North Western Museum of Inland Navigation was formed and registered as a charity. The derelict Shropshire Union Canal buildings and top basin were available and it was decided that this should be the location for the museum. 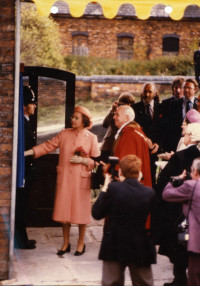